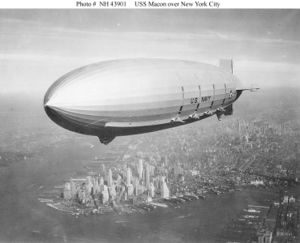 The USS Macon (ZRS-5), sister of the 6,500,000 cubic foot (180,000 m3) rigid airship USS Akron (ZRS-4), was built at Akron, Ohio. She first flew in April 1933, only a few weeks after Akron's tragic loss. Following a series of test flights, one of which took her from Ohio to Wisconsin and back, she was commissioned in June. Macon was based at Lakehurst, New Jersey, during mid-1933 and made several development and training flights during this time. In October she flew by way of her name city of Macon, Georgia, and Texas to Moffett Field, California, where a new airship hangar awaited her.

During the rest of 1933 Macon and her embarked airplanes began what would be an extensive program of participation in exercises off the Pacific Coast, testing her abilities for fleet scouting and other missions. In April 1934 she flew east, again via Texas, to Opa-locka, Florida. Weather damage received in this trip was repaired in time for her to participate in Fleet Problem XV in the Caribbean during May, after which she returned to Moffett Field. Macon made a long-distance flight over the Pacific Ocean in mid-July to intercept the cruiser Houston (CA-30), which was carrying President Franklin D. Roosevelt from Panama to Hawaii. During this mission her F9C "Sparrowhawk" aircraft were operated with their wheeled landing gear removed, a performance-enhancing practice that was thereafter normal when these small fighting planes were embarked on the airship.

Further fleet exercises followed over the remaining months of 1934 and the first part of 1935. These demonstrated Macon's ability, in association with her airplanes, to conduct strategic searching over the vast distances to be expected in a Pacific war. However, they also showed her vulnerability, especially in the presence of opposing airplanes, when she was used for tactical scouting close to the fleet. During the early evening of 12 February 1935, while returning to Moffett Field from an operation over the ocean, USS Macon encountered a storm off Point Sur, California. A violent gust tore off her upper fin, causing damage that soon brought her down into the sea. Though all but two of her crew were rescued, the dirigible sank in deep water, effectively ending the Navy's controversial, and trouble-plagued, program of rigid airship operations.