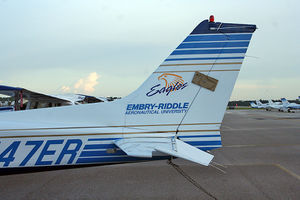 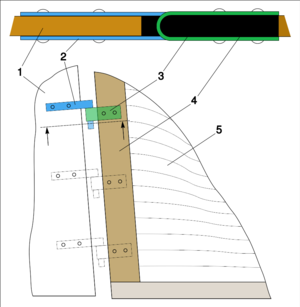 Scheme of a sternpost-mounted medieval rudder. The iron hinge system was the first stern rudder permanently attached to the ship hull.[1] It made a vital contribution to the navigation achievements of the w:age of discovery and thereafter.

On an aircraft, the rudder is a directional control surface along with the rudder-like elevator (usually attached to horizontal tail structure, if not a slab elevator ) and ailerons (attached to the wings) that control pitch and roll. The rudder is usually attached to the fin (or vertical stabilizer) which allows the pilot to control yaw in the vertical axis, i.e. change the horizontal direction in which the nose is pointing. The rudder's direction in aircraft since the "Golden Age" of flight between the two World Wars into the 21st century has been manipulated with the movement of a pair of foot pedals by the pilot, while during the pre-1919 era rudder control was most often operated with by a center-pivoted, solid "rudder bar" which usually had pedal and/or stirrup-like hardware on its ends to allow the pilot's feet to stay close to the ends of the bar's rear surface.

In practice, both aileron and rudder control input are used together to turn an aircraft, the ailerons imparting roll, the rudder imparting yaw, and also compensating for a phenomenon called adverse yaw. Adverse yaw is readily seen if the most simple type of ailerons alone are used for a turn. The downward moving aileron acts like a flap, generating more lift for one wing, and therefore more drag (though since the 1930s, many aircraft have used Frise ailerons or differential ailerons, which compensate for the adverse yaw and require little or no rudder input in regular turns). Initially, this drag yaws the aircraft in the direction opposite to the desired course. A rudder alone will turn a conventional fixed wing aircraft, but much more slowly than if ailerons are also used in conjunction. Use of rudder and ailerons together produces co-ordinated turns, in which the longitudinal axis of the aircraft is in line with the arc of the turn, neither slipping (under-ruddered), nor skidding (over-ruddered). Improperly ruddered turns at low speed can precipitate a spin which can be dangerous at low altitudes.

Sometimes pilots may intentionally operate the rudder and ailerons in opposite directions in a maneuver called a forward slip. This may be done to overcome crosswinds and keep the fuselage in line with the runway, or to more rapidly lose altitude by increasing drag, or both.

Any aircraft rudder is subject to considerable forces that determine its position via a force or torque balance equation. In extreme cases these forces can lead to loss of rudder control or even destruction of the rudder. (The same principles also apply to water vessels, of course, but it is more important for aircraft because they have lower engineering margins.) The largest achievable angle of a rudder in flight is called its blowdown limit; it is achieved when the force from the air or blowdown equals the maximum available hydraulic pressure.