From MattWiki
Jump to navigation Jump to search

To Enable your number pad in putty 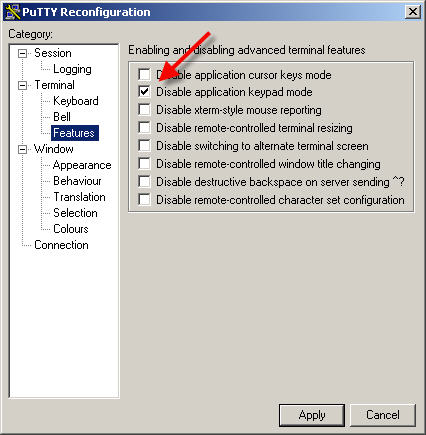 Where does PuTTY store its data?

On Windows, PuTTY stores most of its data (saved sessions, SSH host keys) in the Registry. The precise location is

PuTTY also requires a random number seed file, to improve the unpredictability of randomly chosen data needed as part of the SSH cryptography. This is stored by default in a file called PUTTY.RND; this is stored by default in the ‘Application Data’ directory, or failing that, one of a number of fallback locations. If you want to change the location of the random number seed file, you can put your chosen pathname in the Registry, at

You can ask PuTTY to delete all this data; see question below.

On Unix, PuTTY stores all of this data in a directory ~/.putty.

What does PuTTY leave on a system? How can I clean up after it?

PuTTY will leave some Registry entries, and a random seed file, on the PC (see question A.5.2). If you are using PuTTY on a public PC, or somebody else's PC, you might want to clean these up when you leave. You can do that automatically, by running the command

(Note that this only removes settings for the currently logged-in user on multi-user systems.)

If PuTTY was installed from the installer package, it will also appear in ‘Add/Remove Programs’. Older versions of the uninstaller do not remove the above-mentioned registry entries and file.