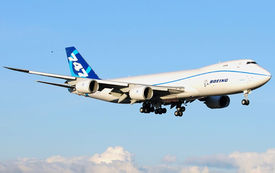 Forces on an airfoil.

Lift is commonly associated with the wing of a fixed-wing aircraft, although lift is also generated by propellers; kites; helicopter rotors; rudders, sails and keels on sailboats; hydrofoils; wings on auto racing cars; wind turbines and other streamlined objects. While the common meaning of the word "lift" assumes that lift opposes gravity, lift in its technical sense can be in any direction since it is defined with respect to the direction of flow rather than to the direction of gravity. When an aircraft is flying straight and level (cruise) most of the lift opposes gravity.[2] However, when an aircraft is climbing, descending, or banking in a turn, for example, the lift is tilted with respect to the vertical.[3] Lift may also be entirely downwards in some aerobatic manoeuvres, or on the wing on a racing car. In this last case, the term downforce is often used. Lift may also be horizontal, for instance on a sail on a sailboat.

An airfoil is a streamlined shape that is capable of generating significantly more lift than drag.[4] Non-streamlined objects such as bluff bodies and plates (not parallel to the flow) may also generate lift when moving relative to the fluid.

Flow around an airfoil: the dots move with the flow. Note that the velocities are much higher at the upper surface than at the lower surface. The black dots are on timelines, which split into two – an upper and lower part – at the leading edge. The part of a timeline below the airfoil does not catch up with the one above. Colors of the dots indicate streamlines. The airfoil is a Kármán–Trefftz airfoil, with parameters μx = –0.08, μy = +0.08 and n = 1.94. The angle of attack is 8°, and the flow is a potential flow.

Explaining lift while considering all of the principles involved is a complex task and is not easily simplified.[5] Lift is generated in accordance with the fundamental principles of physics. The most relevant physics reduce to three principles:

In the last principle, the pressure depends on the other flow properties, such as its mass density, through the (thermodynamic) equation of state, while the shear stresses are related to the flow through the air's viscosity.[6] Application of the viscous shear stresses to Newton's second law for an airflow results in the Navier–Stokes equations. But in many instances approximations suffice for a good description of lifting airfoils: in large parts of the flow viscosity may be neglected. Such an inviscid flow can be described mathematically through the Euler equations, resulting from the Navier-Stokes equations when the viscosity is neglected.

The Euler equations for a steady and inviscid flow can be integrated along a streamline, resulting in Bernoulli's equation. The particular form of Bernoulli's equation found depends on the equation of state used.[7] At low Mach numbers, compressibility effects may be neglected, resulting in an incompressible flow approximation. In incompressible and inviscid flow the Bernoulli equation is just an integration of Newton's second law—in the form of the description of momentum evolution by the Euler equations—along a streamline.[7]

In order to explain lift as it applies to an airplane wing, consider the incompressible flow around a 2-D, symmetric airfoil at positive angle of attack in a uniform freestream. Instead of considering the case where an airfoil moves through a fluid as seen by a stationary observer, it is equivalent and simpler to consider the picture when the observer follows the airfoil and the fluid moves past it.